GoPro has released a new sports action camera almost every year for the past five years, and this October, the latest iteration, the Hero 5 Black, was released along with the Hero 5 Session.

This action-cam looks great.  It’s sleek, light and has a modern feel to it.  The colour was changed from silver to a matte grey which gives the camera a refreshing look.  A 2″ touchscreen was built in and is no longer an ‘optional extra’.

It has two buttons and two openings.  The doors are a bit annoying to get open once they now need to be waterproof and behind them you’ll find the battery and microSD slot in one and a USB-C and mini HDMI port in the other.  The buttons are a record/stop and a power/mode button.

The Hero 5 comes with a ‘bumper’ case which allows you to use different GoPro mounts but doesn’t seem to provide much protection to the camera itself.  The lens cap is easily replaceable, but the screen isn’t.  Also, GoPro were very silly and shipped the camera with a non-clear screen protector (the ones you usually peel off when unpacking new products) and I therefore had to remove this and couldn’t use it as a make-do screen protector. 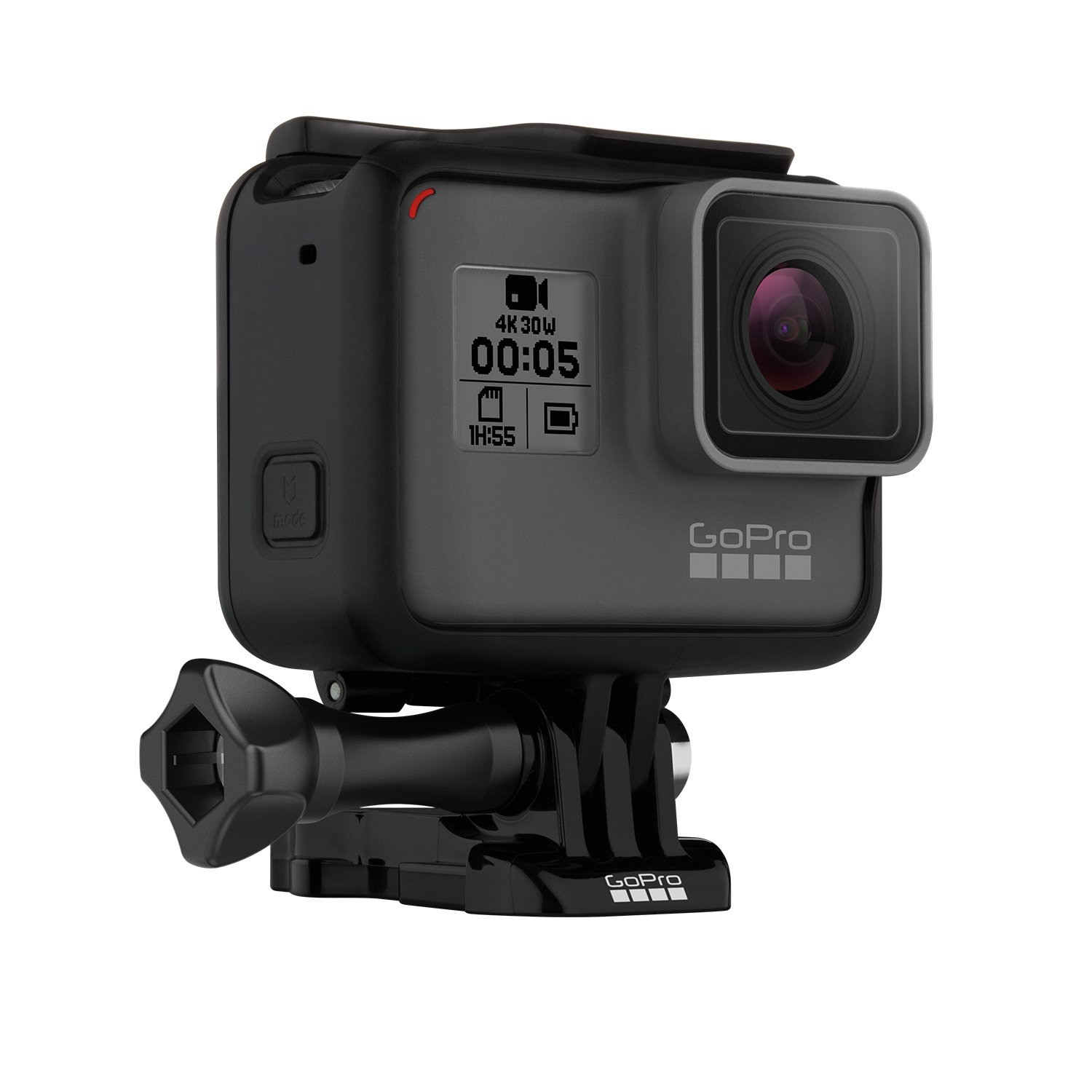 The biggest change with the Hero 5 black is that it’s inherently waterproof up to 10m (33ft) without a waterproof case.  This can be seen as both a good and a bad feature:

This new model even comes with advanced features like GPS and Voice control.  The GPS is a ‘cool’ feature, though not one that I would deem very useful unless geotagging also works throughout when shooting video and could therefore show distance travelled / height climed etc… The voice control is interesting.  If you don’t mind shouting “GOPRO START RECORDING” or “GOPRO TAKE A PICTURE” when you’re around other people then it’s good for you; because unless you’re in a quiet room you need to raise your voice for it to register a command.

The camera is capable of shooting 4K at 30 fps.  I consider 30 fps as being mediocre and 4K excessive, so I shoot at 2.7k / 60 fps. An option to stabilize is also available but this will reduce the FOV by 10% – the resulting stabilization is quite good though you’d need a stabilizing gimbal for high-movement situations like downhill mountain biking.

The in-built touchscreen is one of the best new features in my opinion and it also provides an easier way to control the camera.  GoPro even updated the user interface and made it MUCH smoother and easier to navigate.  Keep in mind that it’s a 2″ screen, so your thumb covers half of it – but I can’t say I’ve had difficulty using it, even with my large fingers.  Some advanced features like ProTune, video stabilization, settings for video and photos, FOV, time-lapse settings and shooting mode can all be easily changed through the user interface.

It’s a great device, I think that’s quite clear from what I’ve wrote about it. This is by no means an all-inclusive review, I’ve left some ‘minor’ features out. The battery life is quite good (about 2 hours).  The footage is sharp. The stereo audio with wind reduction is actually great.  But – and this is not something I usually write, as I’m not easily disappointed – I am disappointed with this product.

I believe this was released too early.  It’s just not refined enough to be a finished product.  I bought this action-cam to use on my wedding day and honeymoon and it let me down.  I first started noticing ‘pink’ glitches whilst recording videos and these happened at a few key moments during both the wedding and the honeymoon.  This is not something you’d expect from a brand new product. And yes, I have contacted GoPro about it, but I was just told that it’s an SD card issue.

Then the GoPro started jamming.  It has the option to playback the videos you shot and multiple times it froze during browsing and the only way to solve this issue was by removing the battery.  I also got an “SD Card Error” and an “SD card Full” red banner (ironically covering a 2:04H remaining on the display) a couple of times.

Before jumping to the conclusion that I had a faulty device and that this is why I was having all these problems; a quick look at other reviews will show that I am not the only one who seems to have had these issues.  I ended up returning my GoPro for a replacement and I am currently waiting for my new one to be shipped.  I hope the new one won’t be as disappointing as the first one I received.

To conclude, at this point I’d say buy at your own risk.  This device is meant to capture those once in a lifetime moments but instead it ruined a couple for me.  I depended on what is usually a great product from a great company but I was let down.