The issue in the past wasn’t the fact that wireless communication wasn’t available, the radio was invented 1895 and Bluetooth is basically the same thing.  The problem was (and is to a certain extent) wireless Power.  That is, at this point in time, it’s impossible to transmit power wirelessly over a relatively large distance, so batteries have to be used, but batteries weren’t great until a couple of years ago.

Now that batteries are better, as I said earlier, wireless is the way forwards. Taotronics (along with a multitude of other electronics companies) realise this and take advantage of it and hence they release products that operate wirelessly.

In this review I’m going to be comparing two Taotronics products, namely, the TT-BH07 and the TT-BH08.  Both are wireless Bluetooth headsets, one is rated for the outdoors. 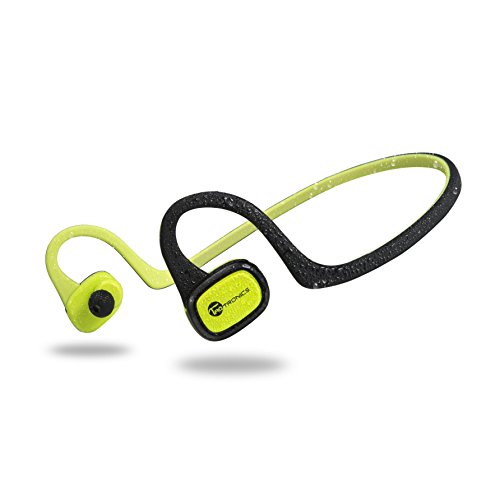 The TT-BH08 is a ‘sweat-proof’ sport Bluetooth headset.  It feels rubbery since it has a soft silicon surface so as to increase it’s water resistance, ergo, it’s sweat resistance. The neck band is flexible and it molds around your neck making it easy to forget it’s even there.  Unlike conventional headset, the TT-BH08 comes with an ‘ear-hook’ which makes sure the earpiece stays in place whilst the user performes different types of sports.

The right earphone has three buttons on it, the power / multi-function button, Volume Up / Next Track and the Volume Down / Previous Track.  The latter two are conveniently marked with braille style dimples, one for Volume down and two for Volume up.  This makes it extremely easy to recognise the buttons without having to feel around.

Switching to the other set, the TT-BH07 have a more sleek and serious design. Although they are marketed as being secure for sports, this model is not water resistant.  They do come with a cool extra feature though, that of having a magnetic attraction at each base of the earpiece.  This means if you’ve had enough of listening to music you can just take them off and clip them onto each other around your neck without having to stop your workout to put them away in a carry pouch. 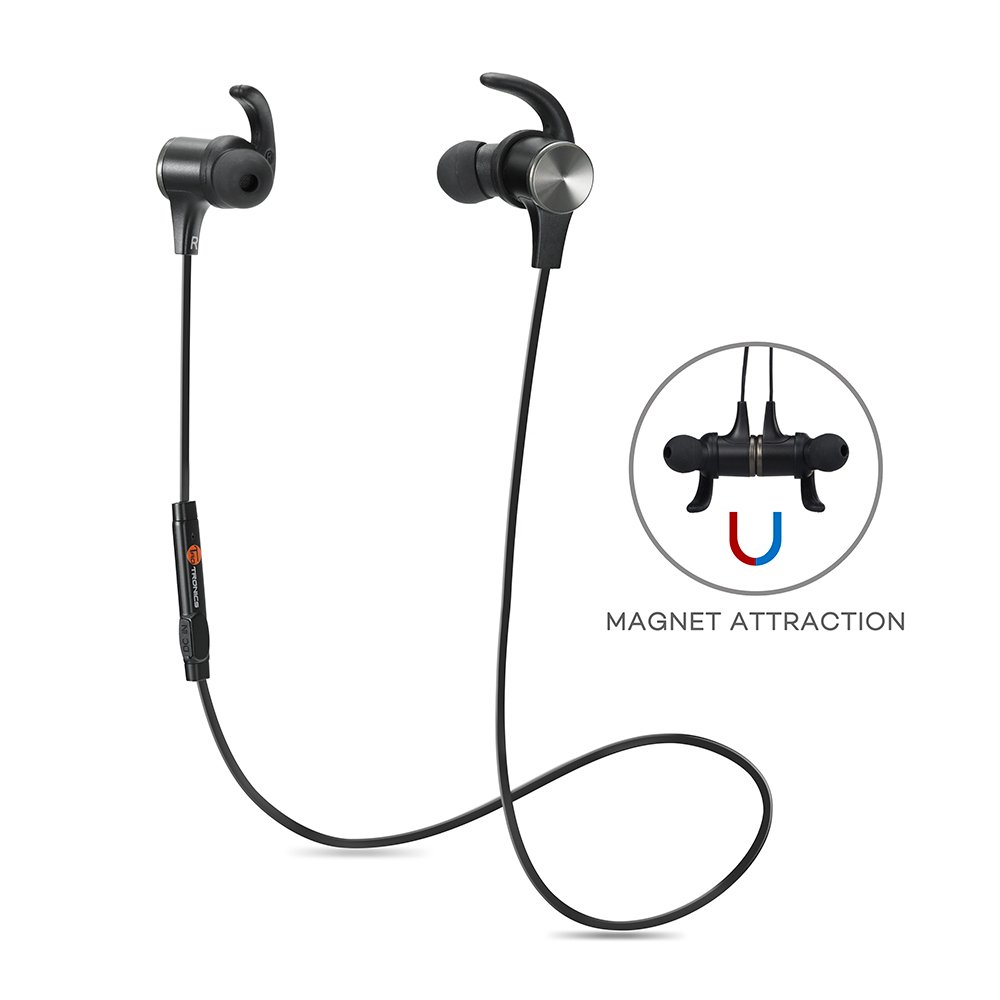 Unlike the TT-BH08 the control buttons are not on the earpiece but are instead on the strap.  The buttons perform the same tasks as for the other headset but they are quite small when compared to the ones on the TT-BH08, though I don’t believe this should be an issue. 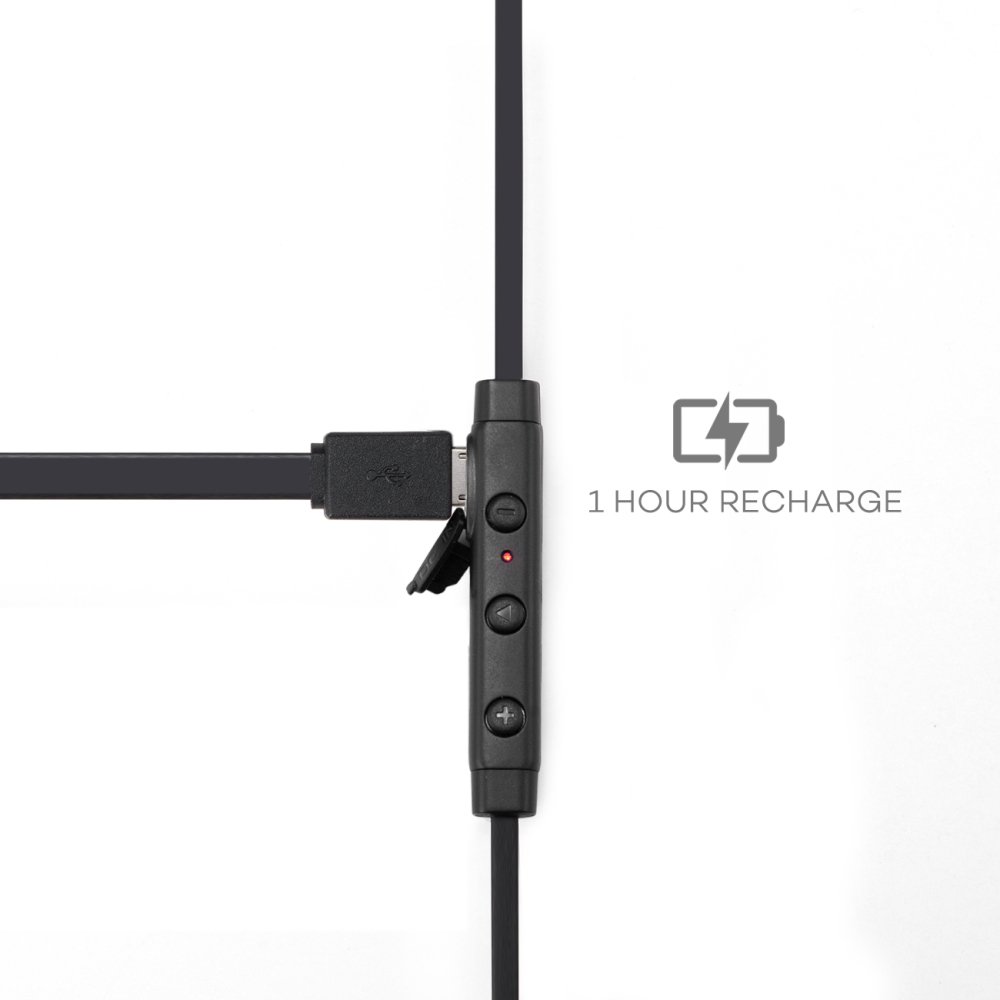 The audio quality is impressive on both of them.  Considering the size of the ‘speaker’ inside the headset I was pleasantly surprised with the amount of bass it emitted. Fortunately the bass isn’t overcoming the other ranges and thus music sounds crisp, clean and genuine.

The TT-BH08 has an in-built ceramic antenna and supports Bluetooth 4.0.  It rocks an impressive battery life of 7 hours.

The TT-BH08 supports Bluetooth 4.1.  This means that it’s quicker and easier to pair with your device than before.  The battery life is rated slightly less at 5 hours, but to be honest I don’t believe I’ve ever had time to listen to music for 5 hours straight!  The stated stand-by time is of 175 hours on a single charge, so don’t worry about forgetting it on!

I tested both devices over a couple of days and I can’t really say I prefer one to the other – they have different uses.  I use the BH08 when I go out jogging, it stays put in my ear and I don’t need to worry about getting sweat on it and ruining it.  When travelling to work I use the BH07 because they are sleeker and more ‘business-like’. They pack smaller than the BH08 so I can just easily slip them into my pocket once I arrive at work.

Which would I suggest? Well, it depends.  Do you like to work out? Do you travel long distances? As I said it depends, but I believe that if you know why you’re buying a Bluetooth headset, you will know which set to buy.

Need a High-Fidelity Bluetooth speaker that is the size of a coffee cup and costs only twice as much as a cappuccino? Taotronics have what you’re looking for!  Their latest, small size, small cost Bluetooth speaker packs a punch that I would never have imagined out of device so small. 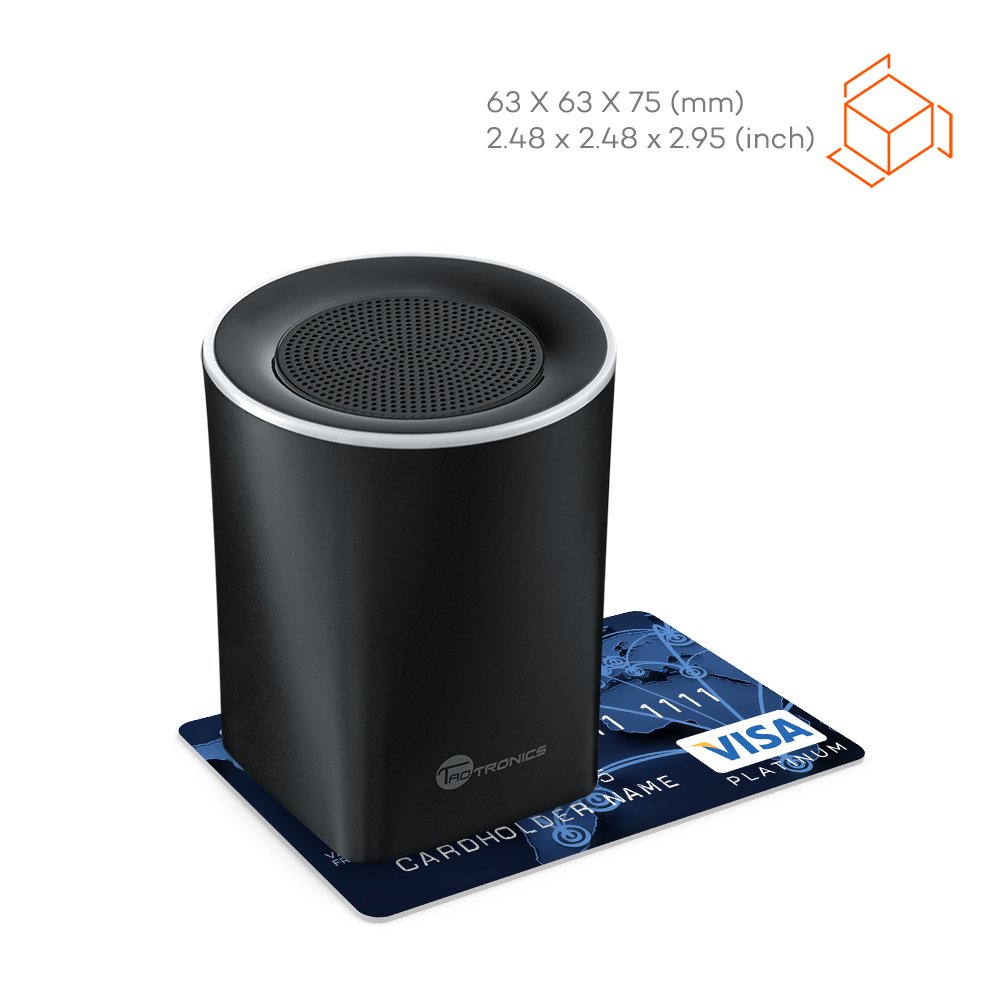 This thing tiny! With a base measuring at 63mm x 63mm thats less than a Visa card! You can nearly throw this thing in your pocket its so small…OK, I might be exaggerating.  But it will fit into your car’s cup holder.  Apart from the size, the gadget is sleek, smooth and well designed.

So what does it do? 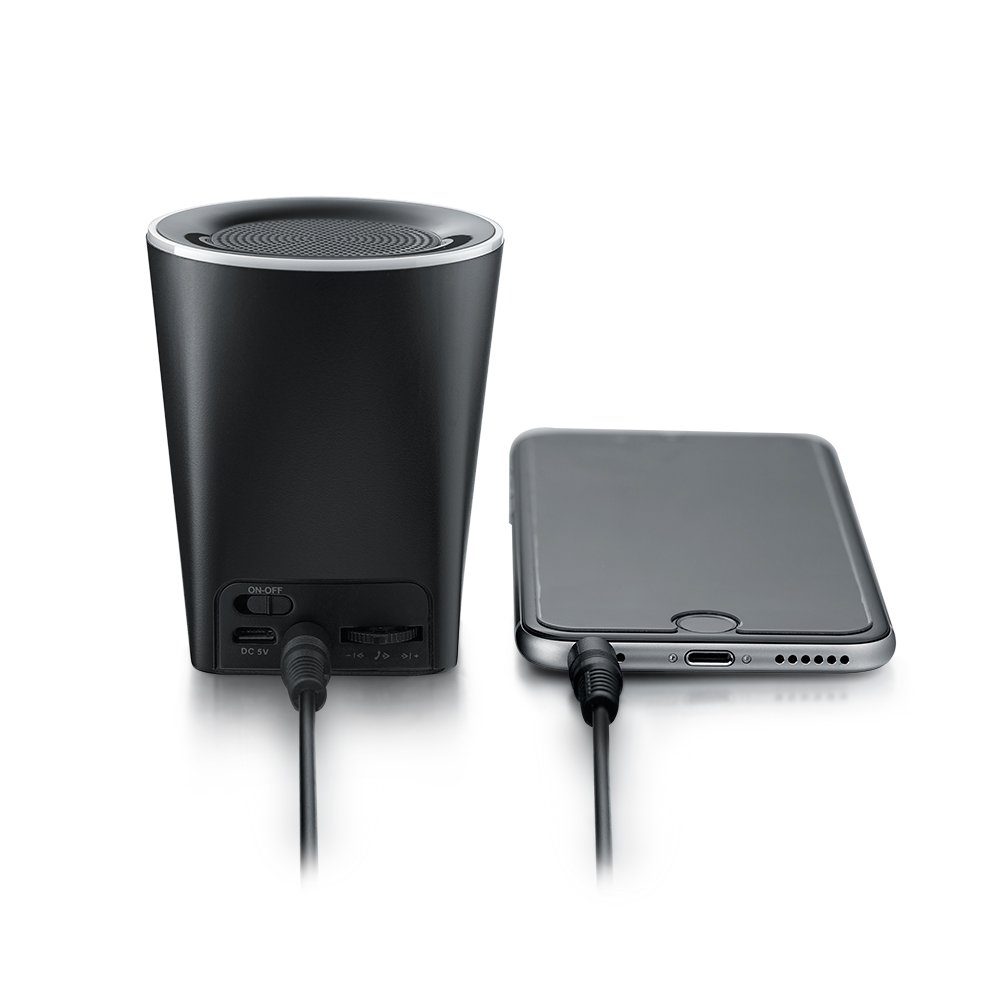 Let me counter that question.  What doesn’t it do? It has Bluetooth 4.0 with A2DP profiling and a 3.5mm AUX jack as input sources. It has a micro USB port for charging and a ‘control wheel’ for answering phone calls, increasing / decreasing the volume and switching tracks.

A colour LED ring towards the top shows you the device’s status, be it ‘ready-to-pair’ or ‘paired’.

…was a breeze.  I plugged it into my USB wall charger to make sure it was fully charged before I started testing.  Took about 30 minutes of charge, although it would usually take about 1.5 hours to 2 hours – but this came with some juice in it from the factory.  I opened my iPhone’s Bluetooth settings, found the TT-SK05 and paired immediately.  The whole process took less than a minute, but keep in mind that my iPhone 4S is dead slow.  I fired up the music app and started playing some of my favourite tracks. 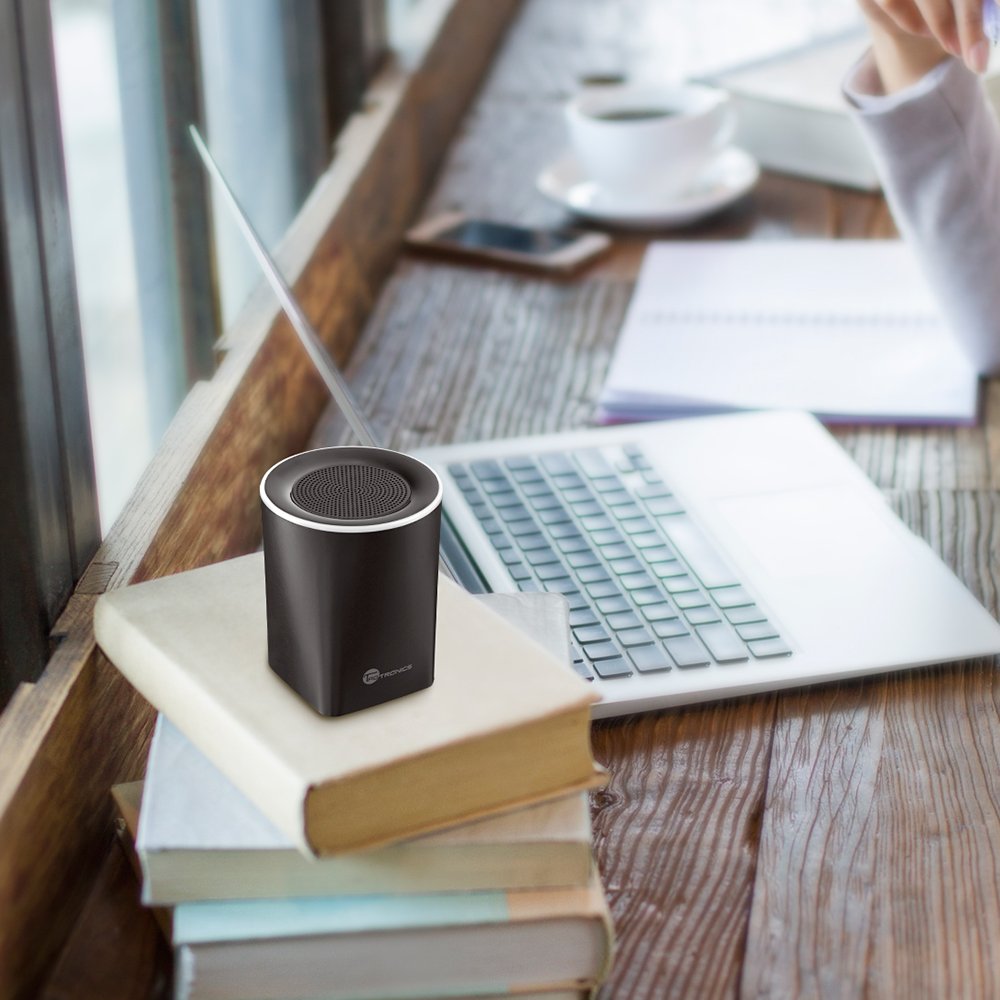 The sound quality is sharp and loud, though lacking in the bass department, which is to be expected from a speaker so small.  The speaker kept on pumping music for well over 5 hours quite impressive for a 500mah battery considering that I kept it on the loudest volume setting.

Answering calls was also easy, and the caller had no trouble hearing my voice through the in-built microphone.

I keep on including this section for completeness’s sake.  I have yet to not recommend a Taotronics products.  They are, in general, good, genuine and most importantly well priced devices.  If you’re looking for a small and portable Bluetooth speaker then go ahead.  It’s worth it!