Today’s market offers a large variety of portable charging stations, all designed to suit different needs; from mobile power users to the OCD’ers who just want to have their phone or tablet constantly at 100%.

The RS Components Power Bank has what one would call an ‘Industrial’ Design – simple yet effective. A black, rectangular case with the USB ports on one end and a large button on the top, surrounded by 4 LEDs.  The LEDs serve as ‘Power On’ indicator, less than 30%, between 30% and 80%, and over 80%.  The latter 3 also flash in sequence when the gadget is charging.  The Power Bank comes equipped with over discharge, over current and short circuit protection.  Whilst recharging, the 3 LEDs will blink or light constantly depending on the charge percentage the gadget is at. 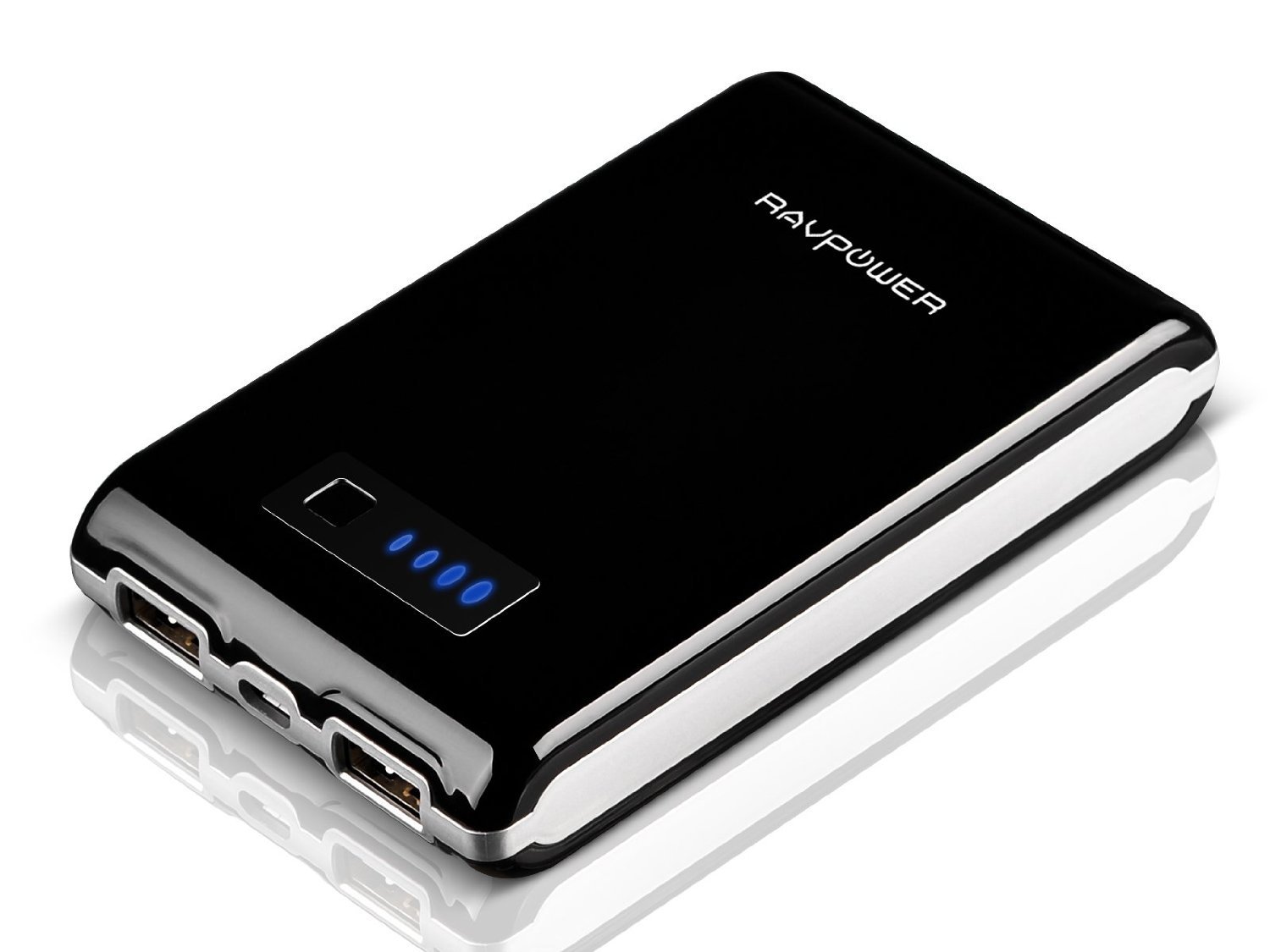 The RavPower Dynamo has a similar design to the RS Components Power Bank with an added silver steak around the side and rounded corners at the front and back.  The button at the top serves a different function to that on the Power Bank; serving as a ‘Show Charge Status’ instead of a ‘Power On’ button it.  So how do you turn it on?  This is where the Dynamo differs from the Power Bank – it automatically detects a device attached to it and supplies power on demand.  If the device is removed the Dynamo will wait for about 20 seconds before automatically switching into “power saving mode”.  Another interesting feature is that of overcharge protection – where the Dynamo will automatically stop charging once the device reaches full charge.  Like the Power Bank, the Dynamo’s 4 LEDs will blink or light constantly depending on the recharge percentage the gadget is at whilst charging. 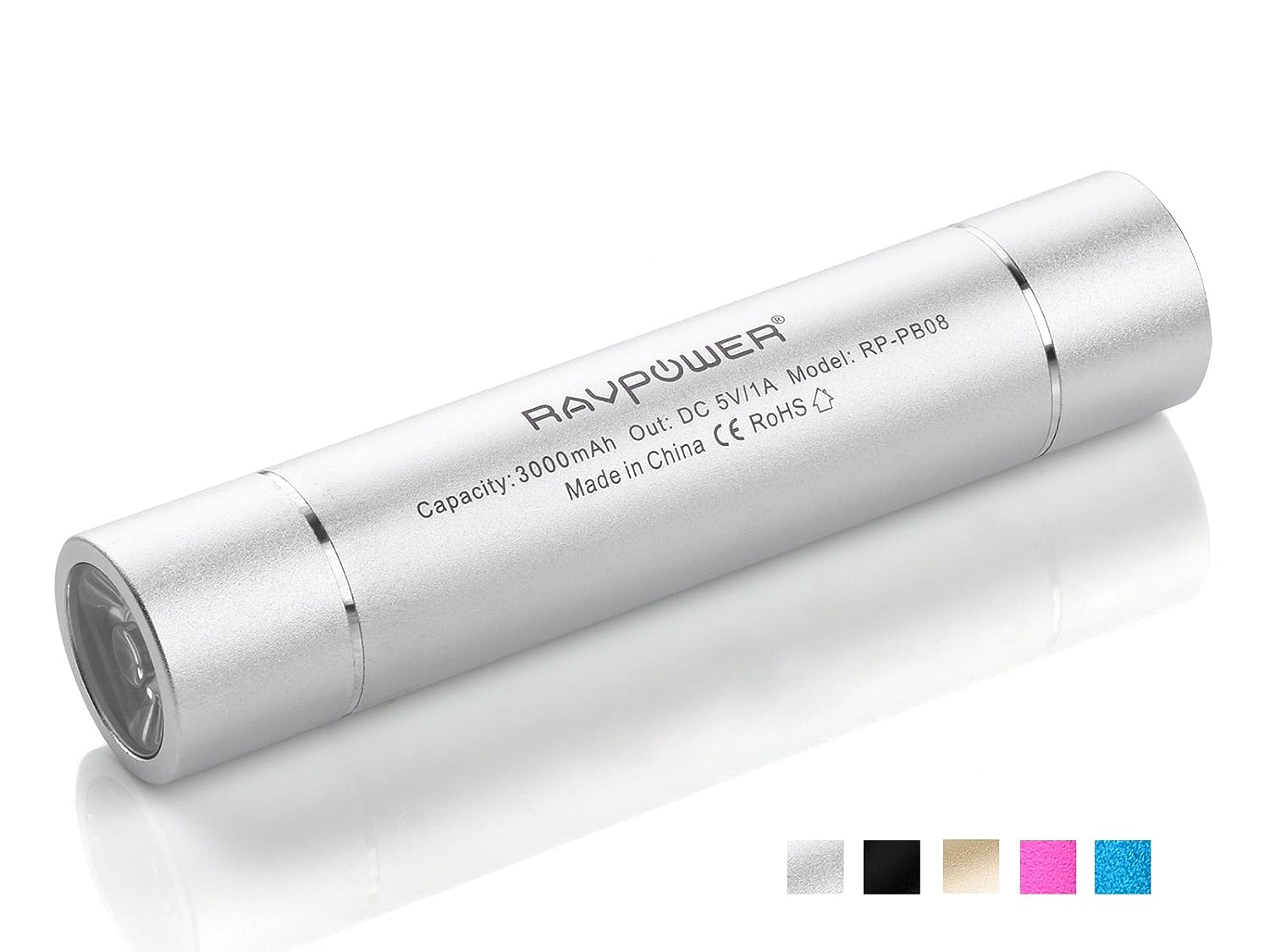 The RavPower Luster Mini has a more sleek and modern design, being cylindrical in shape and coming in 5 different colours.  It’s small enough to fit comfortably in your pocket or handbag, yet packs the capacity to give most mobile phones a full charge.  The Luster Mini lacks a charge status indicator but makes up for this with a very powerful LED light having 3 different modes; high, low and strobe, which can be operated by using a small ‘ON’ button at the end.  The Luster Mini has similar features to the Dynamo with automatic device detection, over current protection and short circuit protection.  A red light shines when the device is being recharged which turns blue when it’s done.

The Dynamo, having a larger capacity managed to charge my iPhone five times (!!), also leaving some extra juice, and my iPad to nearly 100% – making this the perfect gift for a camping enthusiast.

The Luster Mini gave me a 100% charge on my iPhone when not in use, and about 85% when generally using the phone and the in-built flashlight.

What’s in the Box?

We enjoyed testing out all three of these products and they all had their pros and cons.  The RS Components Power Bank is extremely cheap at only £12 but lacks some of the features that the others both have.  Even though the Dynamo is more expensive at £99.99, the fact that it manages to pack double the capacity in a slightly larger package than the RS Power Bank, whilst also including more cool features, makes this our number one choice.  The Luster Mini should be on a different chart, its sleek design, portability, charge capacity and cheap price (£30) make this item a unique product.  Combine all that with always having a powerful flashlight available and you’ve got a runner up!  The only drawback I noticed with the Luster Mini is that it gets slightly warm (not hot) and that one must cycle through all three light modes to turn the flashlight off.

All three models performed well with regards to their main function – charging our draining-quicker-than-we-can-use devices.  The two larger banks charged both mobile phones and tablets efficiently, whilst the smaller Luster mini only managed to charge mobile phones (as it says on the box).

Which one would you go for?